Roses have been revered throughout time as a symbol of love and mystery. As I was traipsing through Fantasy Faire 2014, I noticed this beautiful maiden. She invited me into her humble abode and began to dress me as royalty. I was so ecstatic because I was only a humble servant who was never treated to such luxuries.

As the day continued, she had me repeat these sayings over and over. I was unsure what she was doing but I eventually caught on. She had realized that there was something different with me, I had untapped powers that I had never knew of. My powers were drawn from nature so she began to teach me a few spells. 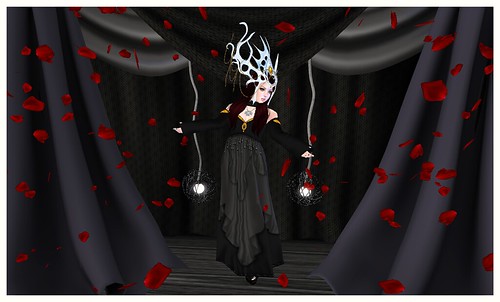 Here I am wearing items from stores I have never heard of : .aisling. and Sweet Lies. The lovely crown was prepared by .aisling. and the beautiful dress was prepared by Sweet Lies. Using the medallion necklace from [AZE] Jewelry designs as my talisman, I was able to control my power and I surrounded myself with rose petals from nearby rose bushes. 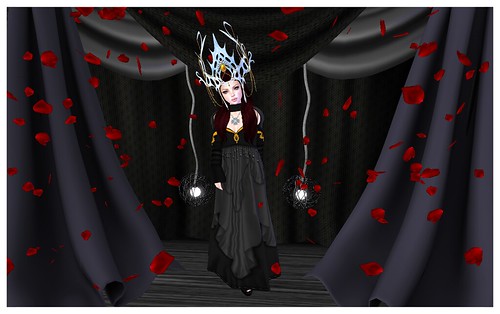 I was amazed at what I had done, and lo and behold the people of the court began bowing to me. The maiden who had pampered me had announced that I was the saviour that was foretold in legends past. I was a little taken back by the news but I knew better than to question the legends in front of the people of the court. 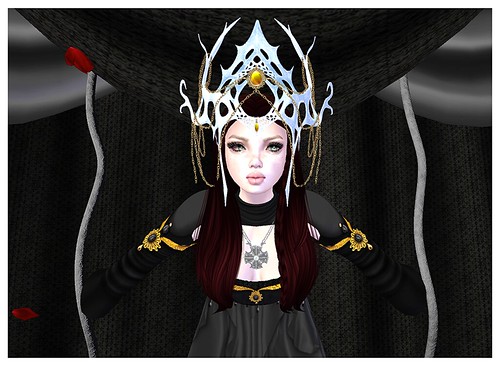 I had also curtsied back to the people of the court as a sign of respect and also to accept their trust. Once the court was cleared, I had begun to interrogate the maiden. She showed me the books and in the books there was a drawing of a woman that looked just like me. I was mesmerized and frightened at the same time.

It had turned out that I was not a person born of the era, but I was a immortal being who had forgotten my memory and in the library there were several memoirs to help me regain my memory and also to relearn the spells I had once taken for granted.